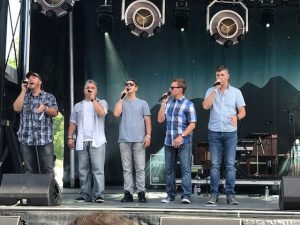 I live in an amazing city! Every summer we have a free music concert weekend that includes local bands that play on 6 different stages. There is a wide range of music to satisfy everybody’s tastes.

The weekend offered a rainbow of melodic choices to soothe the soul, bop to the rhythm, jive with juice and get creative though our senses. It was a festival that honored music and musicians. And it was a gift to our community.

This festival is a combination of two festivals that merged into the Bohemian Nights at New West Fest.

The Bohemian Foundation is a huge philanthropic organization based in Fort Collins, CO. The Bohemian

Foundation is a private family foundation that supports local, national, and global efforts to build strong communities. It was founded in 2001 by philanthropist Pat Stryker, Bohemian Foundation takes its name and inspiration from the bohemian movement of 19th century Europe. They focus on community, music, global and civic areas. Our community benefits through the grants they offer, the music venues they support and much, much more.

The festival brought musicians together with the community and it was an amazing reunion.